MUSIC has NO BORDERS

I was raised in Dubai among sand, sunshine, the smell of the sea and of Arabic coffee. I grew up in a musical family. At home, you could hear traditional Arabic music, classical western Music, Arabian Gulf music, Indian and Persian Music.

I composed my first song at the age of six, inspired by a poem in one of my schoolbooks, and my father encouraged me to perform it in a school event.

A year later, I started my career in Cairo as I played the lead role in Egypt's first children's Operetta. From that point on, everything accelerated. At 14, I had solidly established myself as a well-known singer and actor on the Arab culture scene, which gave me the amazing opportunity to visit many countries and to perform on numerous stages, from London to Shanghai.

My passion for music and theatre has permanently guided and nourished me through every step of my journey. I believe that any musician is a performer once the artistic product comes alive on stage. Every mimic, every gesture, every motion gives a specific meaning or has a distinct impact on the audience. 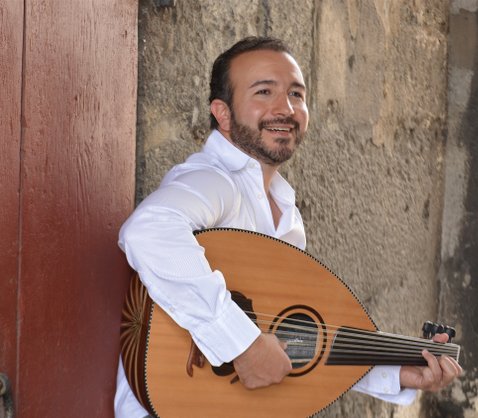 In 2008, I had the opportunity to participate in a residency in Switzerland, which then gave me the chance to pursue my music studies there. This is when I decided to move to Bern.

Leaving Egypt was a pivotal point in my career and in my life. I left everything I had known so far and started searching for a new challenge, a fresh start. I wanted the Pop/traditional Arabic singer to transform and bloom into a professional composer and performer. My new life helped me to rediscover and reconnect with my passion for music and theatre on another level.

Now I think music, and I perform theatre; and sometimes I think theatre and I play music. It is what I call the magic blend. This moment when both come together in perfect harmony is truly unique.

Today, I follow every chance to discover new sounds and to explore new ways to perform in an attempt to “be” this blend and to transmit its magical frequency to my audience.